At the heart of European Payment Innovation

‘How much is 263 minutes every year of missed online sales worth to your business?’ – it’s a question we ask our large merchant clients when they are thinking of multi-sourcing acquiring. The reason this figure is significant is that acquirers will typically only agree to service-level agreements (SLAs) of 99.95% availability in their contracts. If you really need to guarantee payment acceptance above this level of resilience, and trade 24/7, then you have to build connections with more than one acquirer.

There are several options to increase payments resilience that are considered in this analysis. The first three focus on third-party solutions to minimise the impact on internal engineering resources, the last looks at building in-house. This analysis focuses on online sales, but it is equally relevant for those running omnichannel infrastructure.

The easiest option is to select a full stack acquirer (i.e. gateway and acquiring) who is willing to route transactions via their gateway to a third-party acquirer. Most of the major players (with some notable exceptions) are unhappy to take this approach but will do so if pushed. This allows the merchant to integrate with a single gateway but gain access to multiple acquirers. It’s a credible option for almost any size of business, with some commercial downsides with the loss of transaction pooling (although this also applies to all the other options). The biggest challenge with this approach is its failure to increase resilience as it’s the gateway rather than the acquirer infrastructure that tends to have problems with availability.

Historically, merchants contracted separately with acquirers and gateways. This allows a greater degree of control over the gateway infrastructure and connections with multiple acquirers. However, the number of independent gateways with whom merchants can integrate has substantially reduced in recent years. Those that remain tend to be insufficiently agile to meet the needs of fast-moving digital businesses. In addition, this approach still creates a single point of failure in the infrastructure, which is most likely to have an availability issue.

Although we have been monitoring the evolution of orchestration for many years, it has gathered substantial momentum in the last few, as suppliers have identified the gap left by independent gateways. Implementing a third-party orchestration layer allows merchants to rapidly integrate not just with multiple acquirers, but also a range of other payments infrastructure such as token vaults, fraud engines etc. Orchestration players tend to be built on best-in-class technical architecture and include value-adding services such as low/no code set-up. The issue with this approach is that most orchestration players are relatively small and untested in delivering enterprise infrastructure. This may change as suppliers grow, but it does create short-term risk. In addition, external orchestration introduces a potentially substantial additional layer of transaction processing cost, while still creating a single point of failure, which can make the option unviable.

The final option, for those with sufficient internal engineering resources, is to build an internal orchestration layer that allows connectivity to and real-time switching between multiple gateway/acquirers. This infrastructure can also be used to provide multi-business unit connectivity to token vaults, fraud engines, reporting tools, authentication services etc. This approach requires substantial time and resources but delivers significant medium to long-term benefits from both a cost and control perspective. It also reduces the single point of failure risks which impacts all of the above options (assuming that it has been correctly architected). We have found that many of our large merchant clients default to outsourcing their payments infrastructure and arguing to change this policy can be a Herculean task before even starting to build. In addition, one should not underestimate the complexity of, or the loss of functionality that comes from, attempting to harmonising acquirers’ APIs. 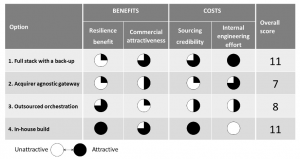 Whilst this analysis has focused on the technical benefits of multi-sourcing, there are other upsides as well:

To wrap up, before undertaking multi-source acquiring it’s important to come back to the question we began with. How much is 263 minutes per year of missed online sales worth? Typically, we don’t recommend investing in multi-acquiring until our clients generate over EUR 2-4,000 per minute in online revenues (that’s just over EUR 1-2 billion in annual turnover). In addition, above this turnover, most merchants have a large enough engineering department to build in-house. For businesses under this turnover, selecting a full-stack supplier with a back-up acquirer is likely to be the most credible option. No matter your size, however, always push for uptime SLAs, regular reporting, independent audits, and have a plan to switch suppliers if your current relationship is not delivering the resilience you need.

In this full length conversation with Yasamin Karimi from Codat we discuss the benefits of Open Finance to acquirers as they seek to onboard new customers and carry out credit checks. Yasmin highlights the emerging opportunities of combining accounting, Open Banking, and commerce platform data to create a rounded view of where a business has been, its current cash position and its order pipeline.